← more from
Thrill Jockey Records
Get fresh music recommendations delivered to your inbox every Friday.
We've updated our Terms of Use. You can review the changes here.

It All Has To Do With It.

by Town and Country 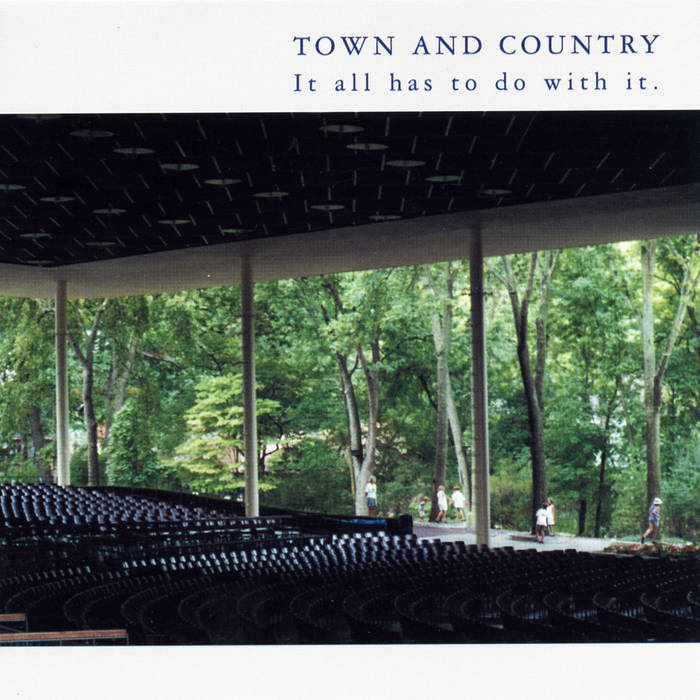 It All Has To Do With It., the third release from Town and Country and their second on Thrill Jockey, follows last Spring's Decoration Day EP. This full-length is the group's most accessible and succinct statement to date. With two string basses, acoustic guitar, and portable acoustic keyboards (harmonium, celeste, accordian) as its basic instrumentation, Town and Country don't just strip down to the drum/bass/guitar logic of rock, they totally sidestep it. In the studio the standard rock method of recording basic rhythm tracks followed by adding overdubs does not work as well for a band without a rhythm section. Accordingly, the group took a year to compose and arrange the songs on this record and three days to record and mix. The finger-picked-guitar-with-drones approach of the first CD has evolved into a more dynamic, group-composed ensemble playing where no particular instrument carries the water and parts are through composed rather than looped. The first three cuts stand as a honing of the craft of the first two CD's, but in the final 15 minute piece That Old Feeling, layers of interlocking grooves reveal a whole new direction that could almost be described as acoustic techno. Influences are Morton Feldman, John Fahey, Don Cherry, Franco Batiato, Gavia Bryars and Sonny Sharrock. Town and Country features Liz Payne on contrabass, celeste, piano, acoustic guitar, and bells, Josh Abrams on contrabass, celeste, mbira, snare drum, and vibes, Jim Dorling on harmonium, celeste and bells, and Ben Vida on guitar, accordian, trumpet, and bells and everyone on bowed bowls. The four met on Chicago's Wicker Park improvised music scene and began playing as a group in January 1997. Josh Abrams has been playing professionally in Chicago since 1994. He is a member of the Sam Prekop band and the David Boykin Outet, has recorded with Bobby Conn, David Grubbs, Loren Mazzacane Conners, the Spinanes, Tortoise and the Roots. He was a member of Rob Mazurek's Chicago Underground Orchestra and led a trio with veteran Chicago musicians Robert Barry and Ron Dewar. Liz Payne and Ben Vida have made two records and toured extensively as half of the improvised group Pillow with Fred Lonberg-Holm and Mike Colligan. Ben Vida recently released his debut solo record Mpls. on BoxMedia. He has performed a composition by Werner Dafeldecker with Sainkho Namtchylak, Christof Kurzmann and members of Polwechseland and he and his brother sing in the band, Central Falls. Liz plays in a trio with Ken Vandermark. Jim Dorling helped form the free improvisational group Etaoin Shrdlu in 1989. Members of Town and Country have improvised with Kevin Drumm, Axel Dorner, Jim O'Rourke, Fred Anderson, Mats Gustafsson, Milo Fine, Donald Garret, Guillermo Gregorio and many others.

Town and Country is Ben Vida, Liz Payne, Jim Dorling, and Josh Abrams. The members of Town and Country met through participation in a series of weekly improv sessions that included like minded musicians Jim O'Rourke, Kevin Drumm and Ken Vandermark to name a few. ... more

Bandcamp Daily  your guide to the world of Bandcamp